Farmer Nathuni Singh is a man who speaks with wisdom. Though most would attribute this to his age—he is 74—Singh says that every farmer is forced to grow wise earlier than usual. “It’s the vagaries of nature that make a farmer learn the hard way,” he says. Singh began farming at age 28, soon after his father’s death, and since then has seen nature change course many times. “Nature has always been unpredictable. I have lost many of my crops to untimely rains and drought. But things have worsened in recent times. With every year, the sun seems to be getting hotter and harsher,” says Singh.

For Indian farmers like Singh, climate change has become a stark reality. The country today is the world’s third largest emitter of greenhouse gases, an alarming statistic as 58 percent of India’s population depends directly on agriculture as its primary source of income. While USAID partners with India to reduce the country’s greenhouse gas emissions using sustainable technologies over the long term, relief is needed right away for farmers.

In response, in 2009, USAID established the Cereal Systems Initiative for South Asia (CSISA) to help farmers adapt to climate change and rainfall variability. CSISA is a public-private partnership with Government of India research institutions and private sector partners, and is led by the International Maize and Wheat Improvement Center (CIMMYT).

“Even in the eastern Indo-Gangetic plains, one of the most fertile regions in the world, we saw farmers lose 25 percent of their crop harvest due to summers arriving ahead of schedule. Where summers previously didn’t begin until May, temperatures now reach 40 degrees Celsius (104 degrees Fahrenheit) by the end of March,” says R. K. Malik, a CSISA senior agronomist.

To counter the impact of excessive and untimely heat due to climate change, CSISA began reaching out to wheat farmers in eastern Uttar Pradesh and Bihar, advising them to plant their wheat crop a month sooner than usual and without first tilling the land in the traditional way. “By sowing before Nov. 15 instead of the end of December, as is the practice in the region, the grain is able to fully develop before the heat wave arrives, which can cause the grain to shrink and lead to crop failure,” says Malik. However, this unique wheat sowing method found very few takers. “Initially, when we started in 2009, only four farmers agreed to plant their wheat early. One of them was Nathuni Singh,” Malik said.

Singh first heard about this new planting method when CSISA representatives came to his village of Devpokhar in eastern Uttar Pradesh to demonstrate how the technique can benefit poor farmers like him. Being the sole bread winner for his family of nine and having grown only 390 kilograms of wheat in the previous year—far below average—Singh was desperate for help. “The CSISA team gave me seeds and fertilizers, and guided me on when and how to sow the seeds without irrigating the land. They even assured me that, if the crop failed, they would repay me for the losses I bear,” he said.

For Ashwini Nayak and Ramawadh Chaudhary—two of the other four farmers who first adopted the early wheat sowing practice—it was the science behind the method that finally convinced them.

“Rice is a water-intensive crop. By planting wheat immediately after harvesting the rice, the wheat crop uses the remaining moisture present in the soil to develop. As a result, you not only save water but also the diesel cost required to run water pumps for plowing and irrigation,” explains Nayak, echoing the scientific tone of a CSISA officer. 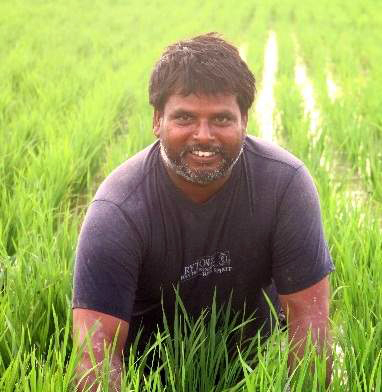 Ramawadh Chaudhary in his field.

But for the three farmers, the decision to move away from the traditional farming technique soon became an uneasy choice. “Everyone in the village used to laugh at us. They called us stupid because we planted our crops without tilling the land and before the season began,” says Chaudhary.

For Nayak, the lack of support from within his family further shattered his confidence: “My own younger brother joined the rest of the village in mocking me. But I always knew that, if there is no risk, there is no gain.”

And it was a risk that paid off for each of them.

“That year, from my 3-hectare farmland, I produced 881 kilograms of wheat, more than twice of what I had grown last year,” says Singh. “It was the first time in my life that I had harvested so much. I was happy beyond words.”

The three farmers not only managed to double their wheat production, but also saved additional expenses such as the cost of irrigation and ploughing. “I used to spend about rupees 30,000 ($470) on my 6-hectare farmland, which included the cost to hire a tractor for plowing the field and diesel for running the tractors. Now I’m saving all of this,” says Chaudhary, who last year bought 4 more hectares of farmland with the savings.

Today, over 620,000 farmers across the provinces of eastern Uttar Pradesh and Bihar grow their wheat using CSISA’s early sowing method. “The farmers found that the technique increased their grain yield by 485 kilograms per hectare. In fact, compelled by our success, even the Bihar State Department of Agriculture now officially recommends wheat farmers to plant before Nov. 15,” says Ajay Kumar, an agricultural scientist working at CSISA’s eastern Uttar Pradesh hub.

Buoyed by its success in India, CSISA, in partnership with USAID, is introducing the practice to thousands of farmers in Nepal and Bangladesh. Singh is excited to hear his success story being replicated outside India’s borders. “At present, the high-quality wheat that I’m growing is being sent to farmers in neighboring states like Uttarakhand. Now my wheat will also travel to Nepal,” says a smiling Singh.

Meanwhile, at Singh’s newly constructed house, farmers from neighboring villages arrive almost every month to inquire about the early wheat sowing method and to learn from his success. “I first welcome them and give them tea and snacks because many come from very far places. I then take them to my farm to show them how the seed is planted and when to put the fertilizer,” says Singh.

After his one-hour training session, Singh offers his guests a glass of water and bids them farewell with the hope that the farmers he trained will also prosper like him. “There is an old saying that the one who feeds the hungry is equal to God. A farmer struggles against many uncertainties and toils every day in the fields so you and I can have food in our plates. He needs to be given the right support and made sure that he is not left alone to struggle,” adds Singh.

This article is authored by Neha Kathor for FrontLines, the news publication of USAID.