The third phase of CSISA runs from 2015-2021, and is implemented by the International Maize and Wheat Improvement Center (CIMMYT), International Food Policy Research Institute and International Rice Research Institute, with the backing of a wide range of public and private sector partners in Bangladesh. The project builds on previous efforts convened by CSISA in Bangladesh (Phase I and II activities, the CSISA expansion project in Bangladesh (CSISA-BD), and the Rice Value Chain Project). In its third phase, CSISA provides a strategic overarching framework that guides and supports inter-related projects, while maintaining a focus on scaling-out innovative crop management practices and technologies to smallholder farmers. 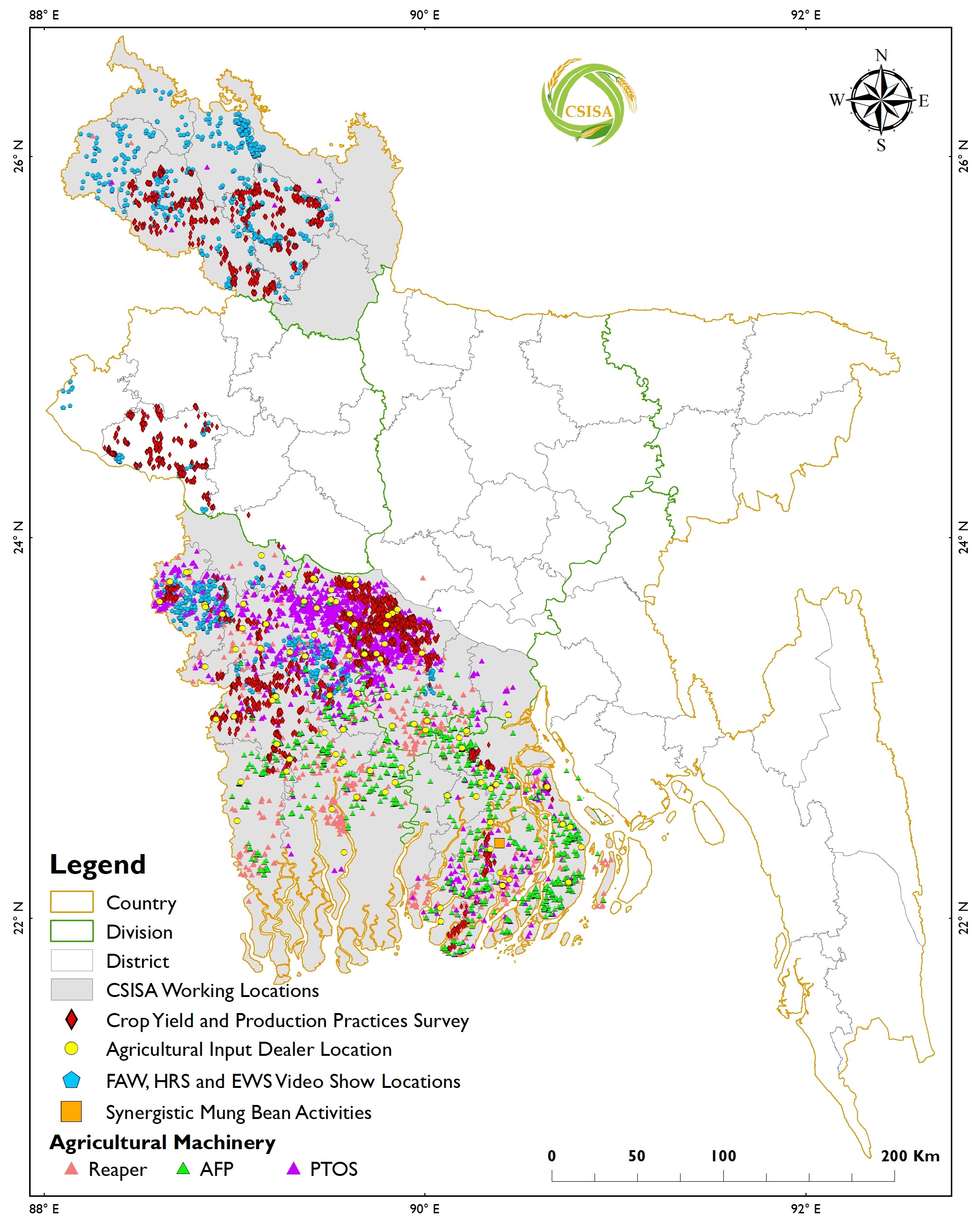 The CSISA project works in Bangladesh’s USAID Feed the Future Zone of Influence (south western Bangladesh) and in Rangpur Division in northern Bangladesh.

The Cereal Systems Initiative for South Asia – Mechanization and Irrigation (CSISA–MI) was a five-year project (July 2013–September 2018) funded by USAID, led by the International Maize and Wheat Improvement Center (CIMMYT), working in partnership with iDE Global under the Feed the Future Initiative since 2013. Over six years (including a one-year extension), CSISA-MI transformed agriculture in southern Bangladesh by (1) unlocking potential productivity through irrigation, and (2) the provision of small-scale agricultural machinery and agricultural services. The project developed and trained local agricultural service providers (LSPs)[1], created an entire agricultural mechanization value chain, and scaled out agricultural machinery services across the Feed the Future zone. Farmers received mechanized services from LSPs in the form of axial flow pumps (AFPs), power tiller-operated multi-crop seeders (PTOSs) and harvesters at a reasonable cost and improved productivity. Private sector dealers and manufacturers invested in and introduced the machinery with the technical support of the project.

CSISA-MI is working to commercialize and catalyze broad availability of agricultural machines for service providers in the Feed the Future zone through partnerships with machinery manufacturers and importers, such as Advanced Chemical Industries, Rangpur Foundry Limited Group, The Metal (Pvt.) Ltd., Chittagong Builders and Janata Engineering. These companies and their service provider clients have invested their own funds to purchase, import, distribute, and market the equipment and the use of machinery services. This has assured available machinery, much of which was imported from abroad, for farmers in the Feed the Future zone. Consequently, US$ 6.9 million has been added to the value of the project.

An improved prototype of AFP was developed in collaboration with local manufacturers, who have also been trained on fabrication, installation, and its efficient operation. A pump test bed was installed at BARI. A booklet was published in Bengali for the service providers to guide the proper installation and safe operation of AFPs. This and related research on surface water irrigation in Bangladesh has been published in an international peer-reviewed journal.

The 100 cm and 120 cm wide attachable reapers were modified for jute harvesting, especially for wet conditions. Developed sulky wheels to improve ergonomics of the self-propelled reaper operators during road transportation and field operation. Produced and distributed a simple language booklet to service providers on operation, repair and maintenance of reapers.