India is the industrial powerhouse of South Asia, with a large agricultural machinery industry that, most notably, sells huge numbers of good quality, low-cost four-wheel tractors. Indian machinery manufacturers are well placed to expand and diversify their markets into other South Asian nations, not only for four-wheel tractors, but also for two-wheel tractors and their specialized implements, including planters and seeders.

To address the need for better two-wheel tractor attachments such as seeder-planters and reapers in Nepal, the U.S. Agency for International Development (USAID) provided funding to the Cereal Systems Initiative in South Asia (CSISA), led by the International Maize and Wheat Improvement Center (CIMMYT), to work with Indian manufacturers of two-wheel tractor attachments to better tailor their designs to the needs of small-scale farmers. Noting that two-wheel tractor owners have not adopted existing models of seeder-planters on a wide scale anywhere in the world, CSISA conducted a series of ‘Design Sprints’ in India that helped manufacturers of two-wheel tractor seed drills and planters tweak and modify their machinery designs to better suit the needs of small-scale farmers, including in Nepal’s hill and Terai ecologies. 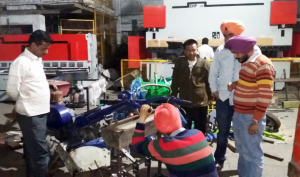 A ‘Design Sprint’ at National Agro in Ludhiana, Punjab, going well into the evening due to lively debates and discussions.

During a series of three- to five-day Design Sprints, CSISA provided seed drill manufacturers with technical feedback on their current designs and facilitated discussions about the merits and demerits of various seed drills currently available in the market (worldwide there are over 40 design offerings from the private and public sector). Groups considered various incremental changes to their existing models, as well as entirely new designs that would be more relevant for, and commercially attractive to, small-scale two-wheel tractor owners, farmers and service providers.

After a series of visits by CSISA in 2016, the Design Sprints began in earnest in early 2017. The Sprints will accelerate the prototyping, testing and ‘getting to market’ of at least three new models of two-wheel tractor planters from Khedut Agro and Dharti Agro, both located in Rajkot, Gujarat, and National Agro in Ludhiana, Punjab. CSISA wanted to give the manufacturers’ designers wide creative berth to be as innovative as possible in solving existing agronomic and ergonomic limitations faced by their current offerings. Therefore, CSISA provided only a few stipulations – any new design should aim to: 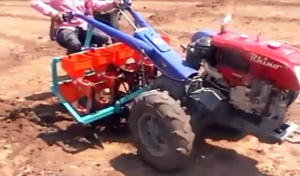 These conditions were derived from years of feedback received by CSISA about farmers’ experiences with various two-wheel tractor seed drills. Farmers conveyed that although many drills were agronomically sound in the field, they were ergonomically problematic for the operator, and too expensive for many small-scale two-wheel tractor service providers.

The three manufacturers have nearly completed their prototypes, and the next stage will involve CSISA facilitating several prototypes from each manufacturer to be tested and, if necessary, refined in Nepal by the Nepal Agricultural Research Center. Ultimately, USAID and CSISA aim to utilize the knowledge and knowhow of the Indian agricultural machinery industry to enable two-wheel tractor-based farmers to enjoy the same economic and agronomic benefits of increased input productivity from mechanized line sowing of seed and banding of fertilizer that four-wheel tractor-based farmers now enjoy in South Asia.