Like many other farmers of Bangladesh, forty-year-old Ashim Halder of Batiaghata Upazila in Khulna is also skilled in carpentry, 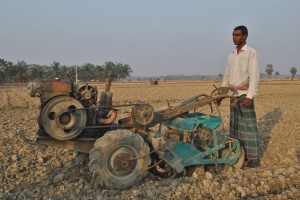 earning extra money on the side by offering carpentry services to neighbors. This ability turned out for Ashim to be the key to innovate a wooden seed plate for the Bed Planter. Besides maize and wheat, the machine now also works for Sunflower seed plantation.

The Bed Planter is a new piece of technology introduced by USAID’s CSISA-MI project. The machine, marketed by agricultural retailer ACI, allows Local Service Providers (LSPs) like Halder to add seed to the farms as they plow – drastically increasing the rate at which land is prepared and the value of their services.

“I wanted to plant Sunflower with this machine, but it had no plate for Sunflower seed. They (CSISA-MI) said it’ll take two weeks to research on this. But by that time, plantation time would be over. So, I thought to try… within hours and after few trial and errors, I made the plate,” says Halder, describing how his innovation improved the Bed Planter and saved him from waiting till next Sunflower season.

Last season, at least 10 laborers were needed to cultivate and plant seed for a 0.1 hectares plot. This season, Halder has not only saved this cost, but his fuel and seed costs are actually half. Female members of his family are also relieved from a large work load. “Before (in plantation) at least 10 laborers used to work for a week. The women had to cook and serve meals three times a day for the laborers. In comparison, they are quite relaxed now,” says one of the female neighbors of Halder.

CSISA-MI’s innovation, combined with Halder’s hard work and ingenuity, are already improving lives of farmers and LSPs as labor scarcity is high in the rural as well as not affordable for smallholder farmers. It also contributing to increase production during dry season in the region.