In Bangladesh, women usually do not work on agricultural tasks such as preparing seedbeds, transplanting seedlings, weeding and applying fertilizer. They do, however, manage approximately 80 percent of all postharvest activities. They also manage pond fish culture in their homestead area, a practice that has become increasingly popular. Nearly every household in southern Bangladesh today has a small pond, but few are optimally managed.

One of the objectives of the Cereal Systems Initiative for South Asia in Bangladesh (CSISA-BD) is to increase women’s participation in agriculture to reduce the gender gap and enable women and men farmers to innovate and adopt improved technologies and varieties. In 2012, Urmila Shil joined one of the 25 women fi­sh-farming groups created by CSISA-BD. Shil lives in a remote village in West Kirthipasha, Jhalakathi sub-district, Southern Bangladesh, with her husband and three children. Over the year, she received training and support on household-based pond aquaculture and horticulture for income and nutrition organized by WorldFish. 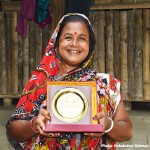 Shil with her award for ‘Best Fish Farmer’

Shil was named ‘Best Fish Farmer’ during National Fish Week 2014 and is one of the 63 award-winning farmers working with CSISA-BD. Many women living in her village have been inspired by her success. They too have undertaken initiatives to improve their family income through aquaculture and homestead gardening. Shil regularly shares her knowledge and experience with them so that they can replicate her success.