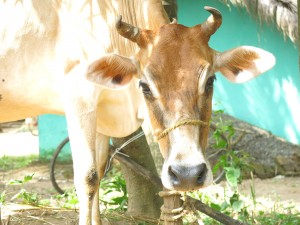 Farming is the main source of income in Amdubi village of Odisha’s Mayurbhanj district and livestock plays a major role. But feeding livestock can be challenging since the plots of land are small as well steep and mostly devoted to growing rice, maize and vegetables. The cattle are fed at home until after harvesting when they are allowed to feed on the remaining straw in the rice fields. Since they lack the resources to regularly purchase feed from the market, most farmers have to resort to feeding their livestock with broken rice and bran produced at home. Although farmers of this village grow maize, they never feed maize stover to animals.

As dairy farmer Suchitra Behera from the village points out, “Milk is a fallback to crop failure and it improves the nutrition of my family members. Every day, we have milk to drink even when it is too little to sell.” Despite receiving only seven years of formal education, Behera tries to educate her two daughters and one son besides also managing the household. Out of the total milk produced, she sells 80-90 percent to a middleman at approximately US$ 0.30 (Rs 20) per liter and the remaining 10-20 percent is kept for household consumption. In the absence of a milk cooperative, she is forced to sell the milk at a much lower rate.

Behera is a member of the Kala Mahajan Group self-help group for women, which allows her to draw the money she needs for farming expenses. She has also been recognized as a promising dairy farmer by the local animal husbandry department on account of her keen interest and hard work.

The International Livestock Research Institute (ILRI), under the Cereal Systems Initiative for South Asia (CSISA), introduced crop residue-based, especially maize stover, feeding strategies in the village to improve milk production of dairy animals and also provided the initial chopping machine. Before this training, farmers were feeding their animals the intact paddy straw, as well as maize leaves, which are difficult for the animals to digest and contain oxalic acid, which can be poisonous to cattle. Now, farmers go to the village center where the machine is placed and get more chopped stover to feed their cattle while only having to pay for the occasional maintenance of the machine.

Behera, who also received training from ILRI, is now able to feed her animals properly as well as save straw by half by feeding underutilized crop residue (maize stover) using less concentrate feed. Most importantly, she and her fellow dairy farmers are producing more milk. They feed the chopped stover to the animal in a bowl, which decreases the risks of contamination, improving the animal’s health in the process. The milk yield per animal has increased by 500 ml per day, making the economic benefits even more significant.