Farmers in Laharhat, the riverine char (islands formed from sedimentation) of Barisal district in southern Bangladesh, are witnessing a change to their traditional agricultural practices. Soon after the monsoon rains last year, farmers grew Aman rice, which has been a traditional practice in this region for many years. Last year, however, they followed the rice crop with wheat, which was new for this area.

“We thought one crop was enough for Laharhat. We had limited knowledge and resources to grow a second crop here,” says farmer Enayat Hawlader. “This year we saw a miracle. I did not even imagine that this land could produce more. And, wheat grew well here,” shares Nantu Hawlader, another farmer. 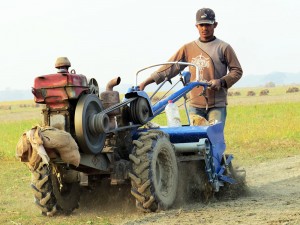 Earlier, farmers used to grow only one crop in this char during the Aman (September to November) season. The rest of the year the vast land would remain fallow. “We used to think this char had no capacity to grow more,’ says farmer Habib Mollik.

Md. Washiq Faisal, Agriculture and Machinery Development Officer, CSISA-MI, says, “This year we proved that the vast char land of Laharhat could be properly utilized to produce crops.” In February 2015, during the harvesting of wheat with a reaper, enthusiastic farmers came to see the results. They were amazed to see that the yield had reached 3.71 tons per hectare. “The farmers who visited to see the harvesting of wheat with multi-crop reaper wished to cultivate their fields in coming seasons,” adds Faisal. In the dry season this year, about 30 percent of Laharhat, that used to remain fallow earlier, has been brought under wheat cultivation after paddy harvesting.

According to Yunus Hawlader, the local service provider (LSP), there is opportunity for more LSPs to provide services in the next season as it is not possible for him to support the huge number of farmers in Laharhat alone.

Monirul Alam, District Training Officer, Department of Agricultural Extension, Government of Bangladesh, says, “I am so happy to see the smiling Laharhat farmers and next year, wish to see the whole Laharhat producing wheat after Aman rice. The land is appropriate for wheat as a second crop.”

According to Alam, in a few cases where farmers used to grow lentil as a second crop, farmers have switched to wheat as it gives more profits. Farmers have also adopted new technologies like PTOS, axial flow pumps and reapers for better yields. “Laharhat will no longer be considered fallow in future,” he added.