Securing a high and stable income from farming despite rising cultivation costs is a common challenge for smallholder farmers. This is certainly true in Bangladesh’s Feed the Future (FtF) zone, where rapidly increasing labor wages and input costs are making rice cultivation less profitable and less attractive for farmers.

Bangladesh rice farmers currently grow more than 70 premium quality rice (PQR) varieties, which are characterized by long, slender and fine grains; may or may not have an aroma; and command a higher price than other, popular rice varieties. PQR varieties have a 20–60 percent price advantage and 50 percent higher profit over other rice varieties, indicating that there could be significant interest in expanded production. The total demand for PQR is growing at 5 percent per year because of rising per capita income, leading to increased consumption of PQR, urbanization, growth of modern food supply chains (supermarkets), and growing investment of private companies in the rice value chains. 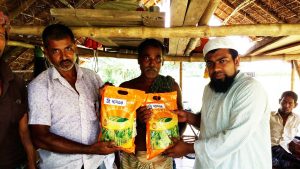 A diagnostic study conducted by CSISA found that the popular PQR variety, BRRI dhan34, had an average yield of 3.6 tons per hectare and farmers earned a net profit of US$ 570 per hectare – approximately 55 percent more than what they would earn from the popular non-PQR variety, Swarna. Higher profitability and growth in demand demonstrates considerable potential for expansion in the FtF zone, where PQR currently accounts for a mere 10 percent of the total rice area.

Increased PQR cultivation is also likely to create additional employment for the more than 4,000 rice mills operating in the FtF zone. The study identified that due to a shortage in supply of PQR, these mills remain underutilized for the better part of the year. Initial discussions with millers and traders has revealed a strong willingness to be linked directly with farmers growing these varieties.

The study identified low yield, a risk of blast damage, unavailability of seeds and poor knowledge of production practices as the major constraints to PQR expansion. To overcome these challenges, CSISA is developing training and extension materials for the Department of Agriculture Extension, Bangladesh Rice Research Institute, NGOs, development partners and agro-input dealers. In addition, CSISA is also facilitating PQR seed supply for nursery entrepreneurs and farmer groups.

In Jessore and Jhenaidah districts, for example, CSISA distributed 375 kg seed of BRRI dhan34, which is not commonly cultivated in the region, to 150 farmers during the current aman season. CSISA has also distributed 850 guides on better-bet PQR agronomy and conducted 36 adaptive trials across three hubs to evaluate the yield performance of eight PQR varieties to identify the varieties that fit best in specific locations, and those with the highest yields.

During the 2016-17 boro season, CSISA is targeting a distribution of 6 tons of PQR seeds at 50 percent cost and distribution of 65,000 copies of knowledge materials (through its partners) to catalyze cultivation in new locations. This will not only increase awareness and knowledge among farmers, but also improve the availability of PQR seeds for farmer-to-farmer dissemination.