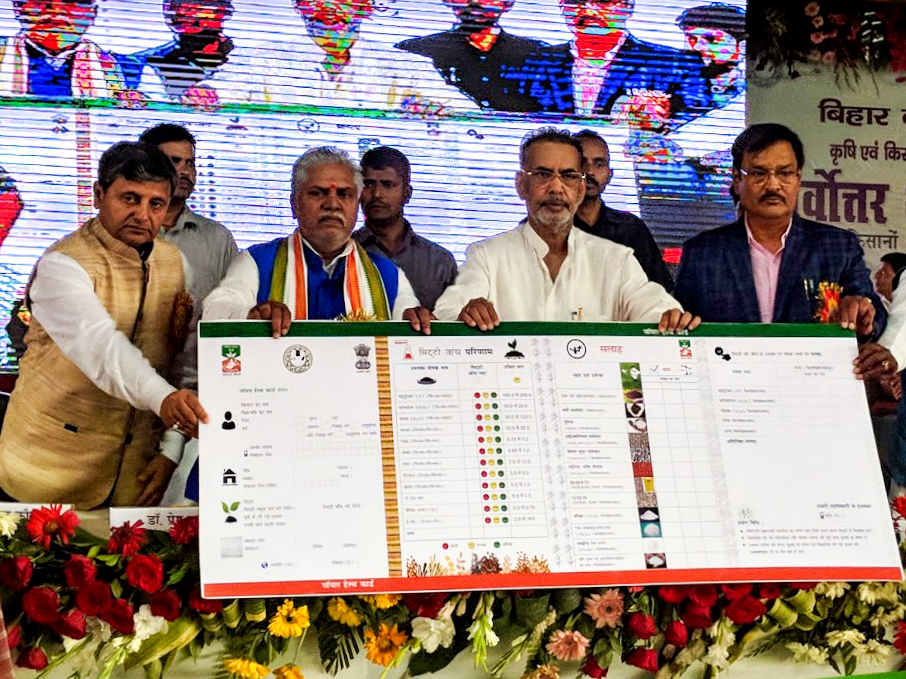 Bihar Agricultural University (BAU), in collaboration with CSISA, launched a new Soil Health Card in Bihar in February 2018. The Indian Government’s Soil Health Card scheme was launched in 2015 to provide 130 million Indian farmers with a ‘soil report card,’ issued once every two years. Soil health cards reflect indicators of soil health, as determined by a lab-based analysis of soil samples from each farmer’s field. The card also recommends corrective measures to improve the soil, if needed.

The scheme’s objective is to help farmers improve soil health and productivity through the judicious use of chemical fertilizers, organic manures and bio-fertilizers. To make the cards more user-friendly, the Krishi Vigyan Kendra (farm science center) system, with support from BAU and CSISA, studied the soil health card’s strengths and weaknesses, as well as farmers’ experiences in trying to interpret the results and implement the recommendations. Results indicated that farmers face significant challenges in applying laboratory data to their field crops. Therefore, the KVKs, BAU and CSISA agreed to redesign the card.

In 2017, CSISA researchers also conducted soil health card user tests with farmers in Bihar and Odisha, soliciting detailed feedback on the card’s content and ease-of-use. Researchers found that although farmers valued the cards because they perceived the content to be useful, they struggled to understand the information due to a confusing format, overly scientific terminology and insufficient inclusion of images. This farmer feedback was presented to scientists at BAU in late 2017 and early 2018. Based on this feedback, BAU scientists endorsed a proposed new design. The redesigned the soil health card aims to improve farmers’ ability to absorb, interpret and use the recommendations included on the card.

The new card was written in the most common regional language and featured additional symbols and images to help farmers understand and interpret the contents, hopefully also making it easier for them to implement the recommendations. On February 24, 2018, the Union Minister of Agriculture and Farmers’ Welfare launched the redesigned soil health card at a regional Kisan Mela (agriculture fair) organized by BAU. The Bihar Minister of Agriculture and the Vice Chancellor of BAU facilitated the release of the new soil health card.

Following distribution of the revised soil health cards to farmers in Bihar, CSISA intends to conduct follow-up surveys to determine whether the new design has increased farmer comprehension and implementation of the recommendations, or whether further innovation is required. Additional initiatives can also be undertaken in CSISA’s other priority geographies, including Odisha and Andhra Pradesh.