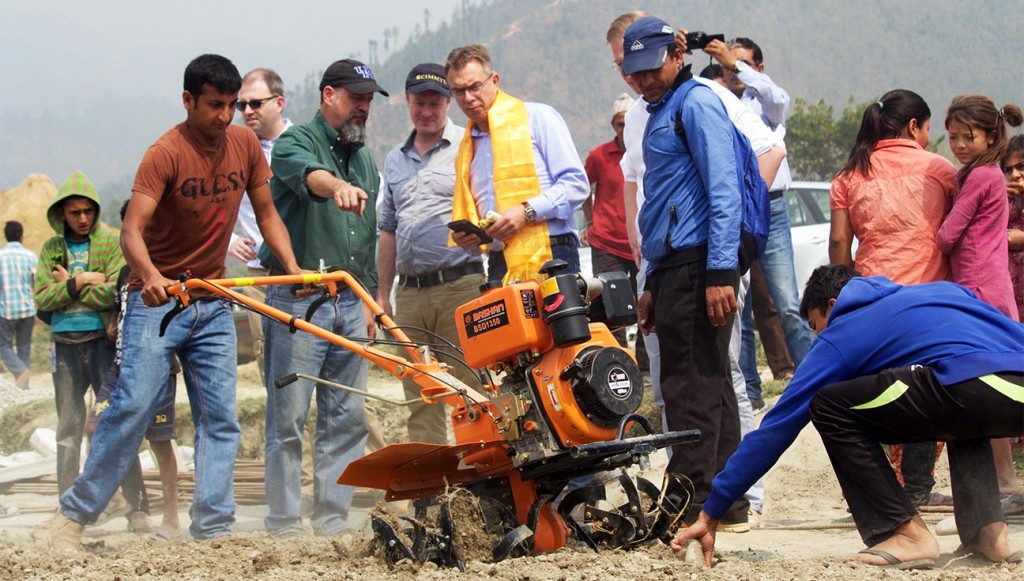 Martin Kropff, Director General, CIMMYT, visited CSISA’s programs in India, Nepal and Bangladesh during February and March. While in India, Kropff visited the CSISA Research Platform at ICAR-RCER in Patna, Bihar, and saw how CSISA focuses on closing yield gaps in different cropping systems in Bihar and Eastern UP in collaboration with government partners and local stakeholders. He also interacted directly with women farmers and service providers to better understand CSISA’s model for scaling up technologies and generating impact on the ground, as well as ensuring that gains can be sustained beyond the project lifecycle.

R.K. Malik, Senior Agronomist, CIMMYT, described to Kropff three of CSISA’s largest impacts in India: (1) the widespread adoption of early wheat sowing; (2) timely seeding or transplanting of rice, use of rice hybrids and transplanting young seedlings by machine, thus vacating the rice field early to facilitate wheat sowing; and (3) the creation of a critical mass of 2,200 service providers, who have helped spread information and CSISA-supported technologies to smallholders across our target districts.

In Nepal, Kropff met with the Minister of Agricultural Development and the Secretary of Agriculture, as well as top officials, directors and scientists at the Nepal Agricultural Research Council to discuss areas of current and future collaboration. Much of the discussion focused on how to align programming and investment with Nepal’s new Agricultural Development Strategy, which prioritizes areas of investment in the country’s agriculture sector through 2025. Kropff also visited Nuwakot, a district benefitting from CSISA’s Earthquake Recovery Support Program, and learned about the distribution of minitillers – along with attachments and spare parts – as well as storage bags, handtools, and agronomic information. His time in Nepal concluded with a visit to Bhairahawa, where he met service providers who continued to provide custom-hire services to local farmers even after project support had concluded.

In Bangladesh, Kropff visited demonstration and trial fields in Jessore and Dinajpur, discussing improved cropping systems and management practices with male and female farmers. He witnessed in CSISA-MI the power of working with the government and the private sector, particularly for the scaling of mechanization. His meetings with key officials at the Bangladesh Agricultural Research Institute, Bangladesh Agricultural Research Council and Department of Agricultural Extension highlighted the importance of cooperation and coordination in CSISA’s work. The Minister for Agriculture, Motia Chowdhury, raised the issue of wheat diseases emerging in Bangladesh and Kropff assured support in response to this emerging concern. He also shared updates on CSISA’s work on production environments characterization using new GIS and remote sensing tools.