Agricultural development is largely dependent upon technological innovations that increase or enhance agricultural productivity. Despite the heralded benefits of many new agricultural technologies, their widespread adoption is often slow.

Slow uptake of new technologies may be due to supply-side constraints; large, fixed costs; or difficulties in learning about their relative benefits. 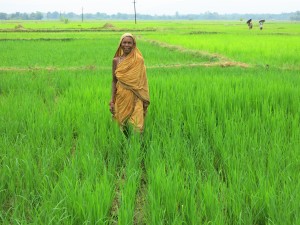 The lack of key information about a technology’s benefits may be especially relevant for technologies such as abiotic stress-tolerant cultivars, which may not show benefits under all degrees of stress.

Adoption can be constrained by the uncertainty that arises due to both risk and ambiguity. Some factors that influence adoption decisions may not be directly visible, such as farmer preferences regarding uncertainty. Farmers in developing countries face a wide range of uncertainty, not the least of which arises from climate variability, including droughts. Droughts represent one of the most pressing constraints to rice production in rainfed environments.

Risk arises because, while almost all new agricultural technologies tout increases in mean productivity, many perform optimally only under certain conditions, such as with precise additions of complementary inputs. Deviations from these conditions may result in reduced yield benefits vis-´a-vis the traditional technology and increased variance. Many farmers may dislike these risks and prefer more traditional technologies with less variable outcomes.

Ambiguity, on the other hand, arises because new technologies are unknown and unproven in the minds of prospective adopters, who generally do not know the yield distribution of the new technology. While this ambiguity makes it difficult for farmers to formulate profit expectations, farmers may also have apprehensions due to insufficient information, which may influence behavior and decision-making.

In a recent IFPRI Discussion Paper, selected as Best Paper from among 86 competing presentations at the recently held 4th International Conference on Applied Econometrics in March 2014 in Hyderabad, CSISA researchers Patrick Ward and Vartika Singh measure and analyze various behavioral parameters related to decision-making under uncertainty collected through field experiments in rural India. The experimental design allows for the identification of several different behavioral parameters, including risk, ambiguity and loss aversion and individuals’ tendency to weigh disproportionately the probability of rare events when making decisions.

Researchers conducted a series of five experiments, each comprising a set of choices between two options with different real payouts. Specifically, they observed that risk aversion alone does not sufficiently describe individuals’ behavior, but individuals have a tendency to weigh outcomes differently and demonstrate aversion to potential losses.

Disaggregating by gender, the research found that women are both significantly more risk averse and loss averse than men.

When they studied preferences for drought tolerant (DT) rice, the researchers observed that farmers’ risk and loss aversion interact with their perceptions about the potential risks and losses associated with the new seeds.

Unlike other new agricultural technologies, which may increase expected yields at the expense of increased variability, DT rice actually reduces overall yield variability and provides protection against downside risks, at least up to a certain level of drought stress. Both risk aversion and loss aversion significantly increase the probability that farmers will choose the newer DT variety seeds over their status quo seed (the seed they cultivated in the previous Kharif) since the additional value given by DT paddy is more compared to other paddy.

Therefore, the role of risk and ambiguity preferences seems straightforward when it comes to a technology like DT rice, since the technology provides benefits specifically targeted to farmers addressing climate-related risks and potential losses. However, considerable scope remains to explore the role of risk and ambiguity preferences on other agricultural technologies or farm management practices, especially ones in which the benefits are less visible in the physical product.