In mid-2013, after overhearing several conversations about CSISA-Nepal’s promotion of new scale-appropriate agricultural machinery with farmers in the Far West, Sumitra Manandhar-Gurung, CEO of Mahila Sahayatra Micro Finance Bittya Sanstha approached CSISA about whether its agricultural mechanization program might have something to offer her bank’s clients – women farmers who live mainly in the hill regions of Nepal.

Gurung asked, “Isn’t there something out there that I can give loans for besides goats? Can’t you show us some small powered machine, tractor or a small mill in the market that our women could take a loan for and provide services to their neighbors while earning a livelihood?” 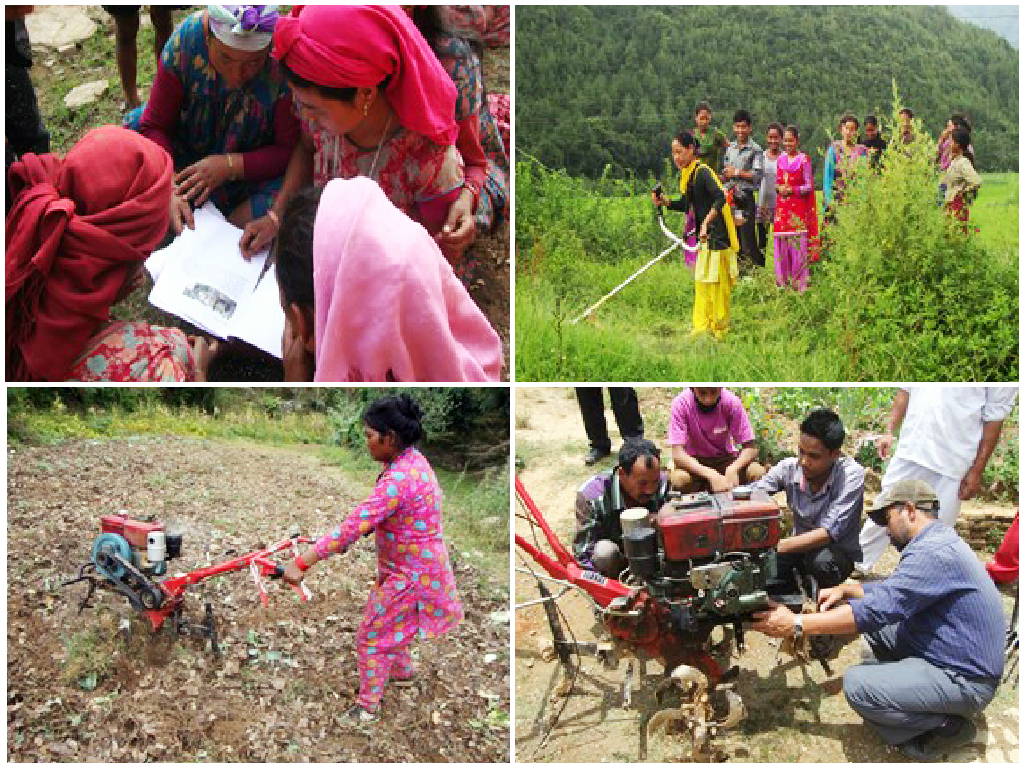 Early on, the outcomes of these trainings were mixed. In Chitlang Valley, the first buyers of a mini-tiller, (a small rotavator-plow, powered by a 4.5 HP diesel engine) were Gyani (58 years old) and Saligram Manandhar (68 years old), who told CSISA how proud they were that they were able to take turns preparing their own land (nearly a hectare) for vegetables and rice, while their sons were working far away in Kathmandu. Manandhar related that in the last few years the few bullock plowmen remaining in the village were charging very high prices for their services and that by using the mini tiller in late spring and summer he saved nearly $200 (NPR 20,000) – half the price of the mini-tiller.

Since Manadhar purchased her machine in April 2014, five additional households, including a disabled woman bank member took a loan from Mahila Sahayatra to purchase the machine. Other equipment such as the powered brush-cutter (for the harvesting of wheat, rice fodder crops, etc.), pedaled (manual) open drum rice thresher and other implements for the mini-tiller such as cage wheels and furrow makers have also been sold. CSISA trained the local motorcycle mechanic in mini tiller repair and now he even stocks some spare parts.

Holeri Village in Rolpa District is different from Chitlang. Holeri lies in what was the epicenter of the Maoist Revolution and is much poorer and more remote. Parui arrived there in August 2014 and reported how difficult it was working there, not only due to the remoteness but because many farmers were negative about the machinery she was demonstrating. Leaving Holeri in October, she was dejected that not a single machine had been sold.

However, in December 2014 she started receiving phone calls from bank staff and women farmers who were interested in purchasing the small ½ HP electric-powered maize sheller. Bank staff sold it that week and then more farmers called, saying there were four or five more women interested in immediately purchasing maize shellers. Parui is currently in discussion with CSISA’s private sector collaborators (agro-vets and machinery agents) on how they could supply machinery to farmers in Holeri, for example by setting up a sales agency there.

Parui is currently in the process of finishing her report as well as preparing a catalog of scale- and gender-appropriate agricultural machinery, a document that will include photos, descriptions, prices and locations where they can be purchased in Nepal. Mahila Sahayatra requested the catalog for use across their locations.

CSISA and Mahila Sahayatra now agree that this initial experiment in marrying scale- and gender-appropriate agricultural machinery with a micro-credit institution has shown initial success and needs to be further formalized, including through formal tie-ups between Mahila Sahayatra and private sector machinery providers that would supply not only the machinery but also training and servicing of the machinery (e.g., repair, spare parts). Discussions about the partnership’s next steps and how to fund them are ongoing.