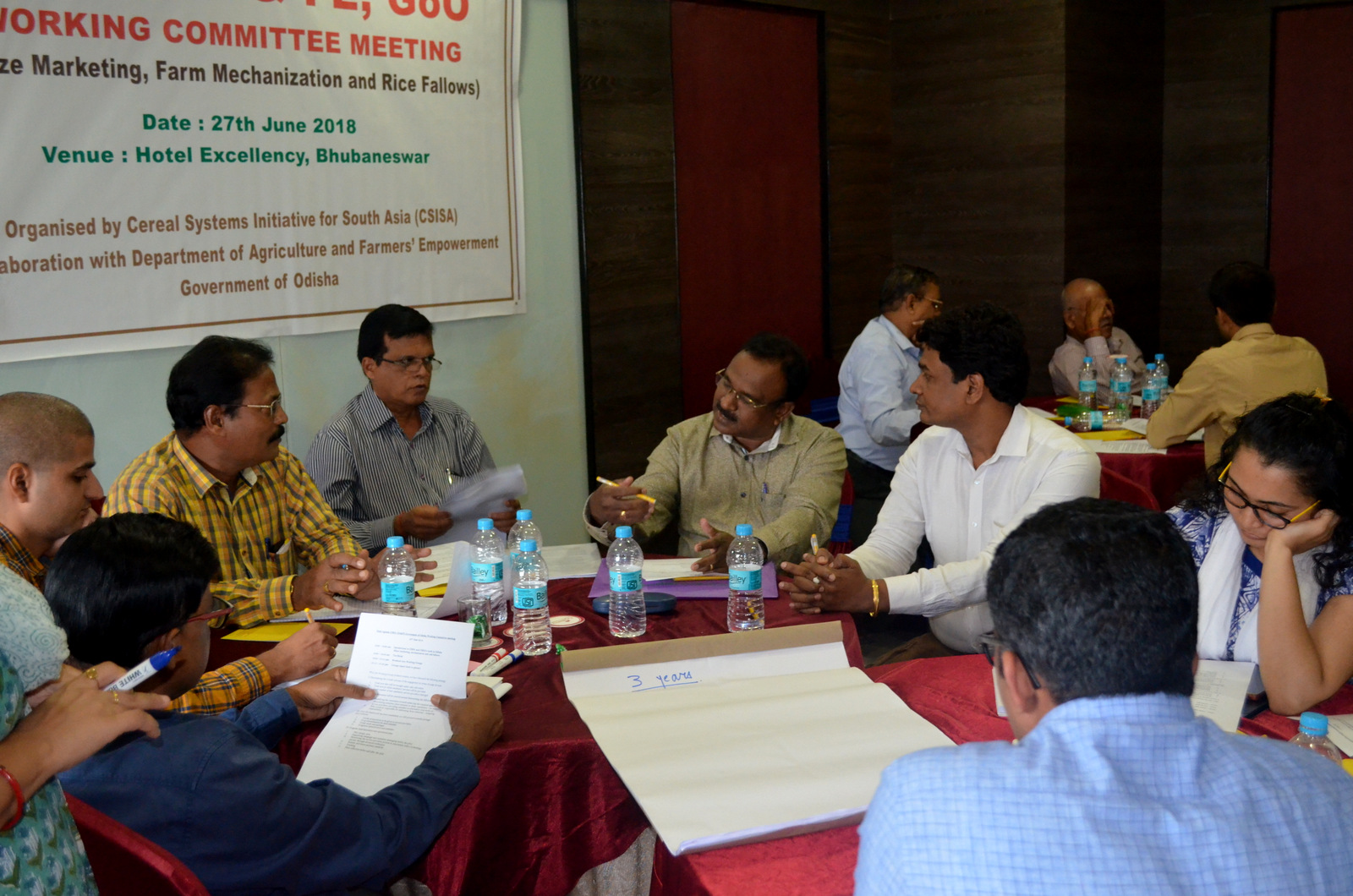 The Central Government of India has invested US$ 148.74 billion in the fiscal year 2017–18 to support agricultural development in the country. However, these investments are often unable to target the most relevant needy areas or populations due to lack of concrete evidence of their effectiveness. To support the inclusion of scientific evidence in policy-making processes, CSISA discussed with the Government of the state of Odisha the need for co-generating evidence and for its endorsement to launch a policy experiment on rice-fallow intensification and mechanization options during the 2018–19 Rabi season. The policy experiment will entail offering different combinations of incentives for service provision, irrigation facilities and for giving farmers access to credit. These experiments will be supplemented with baseline and endline surveys to gather data on the impacts of the interventions.

Rice-fallow intensification was the first priority raised by the incoming ICAR Director General, Dr. T. Mohapatra, in discussion with the CSISA leadership team in March 2016. A strategic meeting with a team of policy makers and other decision makers at the Department of Agriculture and Farmers’ Welfare, Odisha, held on 24 November 2016, identified behavioral constraints to rice-fallow intensification and mechanization as two core themes for working closely with the department and allied institutions. Since the Odisha Government invests heavily in mechanization (~US$ 50 million in 2017) in the form of direct subsidies and support to agri-service entrepreneurs, CSISA’s engagement with the Government of Odisha aims to capitalize on this opportunity by helping the State Departments of Agriculture sharpen their support programs by better targeting subsidies that do not crowd out private investments but do encourage the development of markets and machinery value chains.

Following up on discussions with the Government, CSISA conducted two behavioral evidence-generating studies in Kharif 2017. First was a participatory cognitive mapping exercise in which farmers and other stakeholders drew a map of their imagined farming systems; at the same time, CSISA sought their perspectives on ways to overcome constraints to double cropping. Second, using the key outcomes from the cognitive mapping exercise, CSISA conducted an experiment to elicit individuals’ investment preferences, as well as their commitment to community funding for key intensification parameters such as irrigation, credit, timely harvesting and marketing, and cropping systems. On the mechanization front, CSISA conducted a survey on potential mechanized services and the entrepreneurial behavior of service providers. Data from this survey were used to analyze the scope for introducing incentivization in local machine service provision.

Findings from these studies were presented to the relevant stakeholders within the Government of Odisha, including the Principal Secretary of the Department of Agriculture. CSISA now plans to design an integrated policy experiment that considers multiple leverage points that encourage farmers to consider double cropping and mechanization (investment options, institutional facilitation and incentivization in service provision) to be piloted during the coming Rabi season in Odisha. This proposed experiment is expected to determine the key factors that make farmers keep fields fallow and the policy incentives required to encourage potential entrepreneurs to become machinery service providers. The opportunity and apparent need for mechanization and cropping intensification in these expansive ecologies is clear, particularly given the diminished yield in the “breadbasket” areas of northwest India, the lack of major genetic breakthroughs that increase the yield potential of staple crops and the prevailing labor constraints.

Lessons from the experiment are expected to help identify the agricultural policy changes at the State Government level that are needed to boost crop production and intensify the cropping systems. This collaborative arrangement between the State Department of Agriculture, Odisha and CSISA is also notable because the State is a key partner in generating evidence as well as in facilitating adoption.