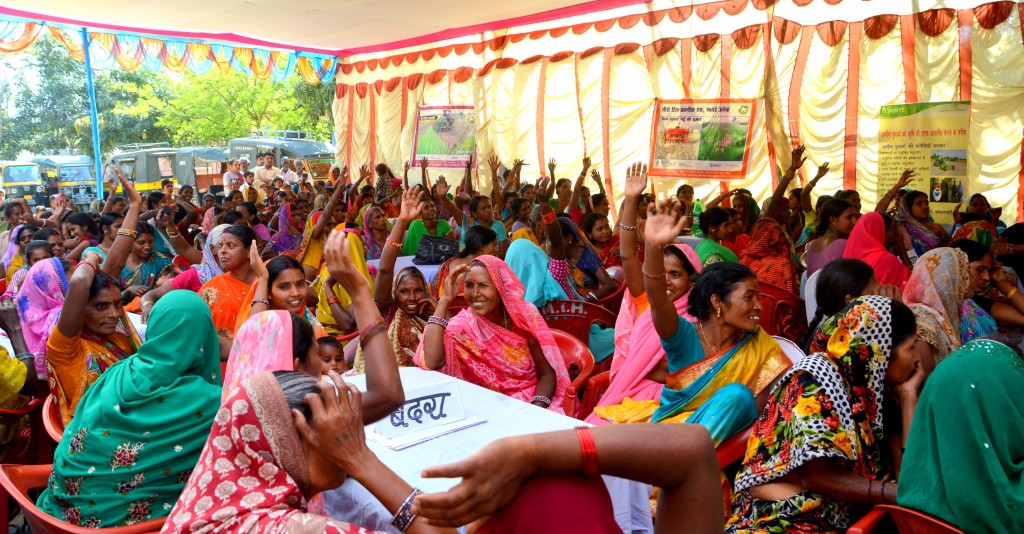 On a hot summer day in the Muzaffarpur District of Bihar State, India, 345 women farmers gathered to talk about the challenges they face in agriculture with a visiting team from the U.S. Agency for International Development and the Bill & Melinda Gates Foundation. During the event, which was organized by the Cereal Systems Initiative for South Asia (CSISA), one woman said, “Brothers, if you are farmers, so are we.” The group responded with loud claps and whistles. The women then discussed their day-to-day issues and shared their enthusiasm to learn about new agricultural technologies and management practices.

It is relatively uncommon to see women in rural India – where gender discrimination runs deep and women often are not empowered to speak or make decisions – talk openly and passionately about their lives. The farmers who attended the CSISA meeting are members of the new initiative, Kisan Sakhi, meaning “a woman farmer friend,” jointly started by CSISA and the Bihar Mahila Samakya, an Indian government program on women’s equality.

Women work extensively on farms across India – participating in sowing, weeding and harvesting – and are responsible for managing farm work and household chores. However, their contribution in agriculture remains largely unseen and unacknowledged. According to the Food and Agriculture Organization (FAO) of the United Nations, women account for 43 percent of the agricultural labor force in developing countries and produce 60 percent of the food, yet compared with men farmers most women don’t have land rights or equal access to education or training.

Kisan Sakhi aims to empower women farmers in Bihar by disseminating new climate-resilient and sustainable farming technologies and practices that will reduce women’s drudgery and bridge the gender gap in agriculture. FAO estimates that the productivity gains from ensuring equal access to fertilizer, technology and tools could raise the total agricultural output in developing countries and reduce the number of hungry people.

“In spite of doing all kinds of work in the field, I never got the respect as a farmer that men farmers would get,” said Sumintra Devi, who is now a member of Kisan Sakhi. She is being introduced to new technologies and management practices such as improved weed management, maize intercropping, intensification of cropping systems with summer green gram, machine transplanting of rice under non-puddled conditions and nursery management.

“We have discussions with the group members during which they identify the training needs and practices they would like to adopt,” said 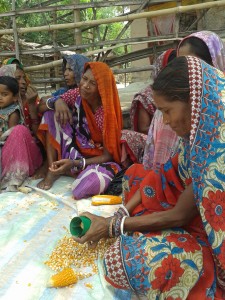 CSISA gender specialist Sugandha Munshi. In one such discussion, the women mentioned the painful and tedious process of shelling maize by hand. CSISA organized training that demonstrated post-harvest technologies such as a hand-powered maize sheller and “super bags” for effective grain storage.

Six geographical areas – Aurai, Bandra, Bochaha, Gai Ghat, Kudhni and Musahri – in Muzaffarpur District have been identified for the pilot work. “Women farmers recognize that receiving information and skill is more important than short-term monetary support from a project,” said R.K. Malik, the leader of CSISA’s Objective 1 and the Bihar and eastern Uttar Pradesh hub manager.

CSISA has also started helping women farmers to become entrepreneurs. As part of Kisan Sakhi, four women self-help groups in the Bandra area are pooling resources to buy a rice-transplanting machine, which will help them to earn income by offering custom-hire services. “It is part of a major shift in perception of participating women groups. CSISA and its partnership with the government of Bihar now see an opportunity to involve women for adoption of new technologies and facilitate them to become service providers,” said Malik.