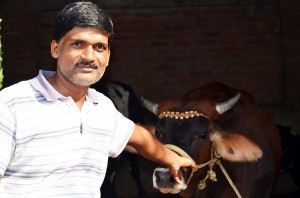 Ram Nandan Prasad, a dairy farmer in Muzaffarpur, Bihar, was convinced that his 19–20 crossbred dairy cattle could yield more milk than they were producing. So, he fed them concentrates available in the local market and ensured high levels of hygiene. Yet, the average yield per cow was just 15–20 liters per day.

There is a strong demand for milk in the region where Prasad lives, for direct human consumption and for mixing in tea/coffee, making ice cream, sweets, curd and butter. Milk provides vital nutrients for the community, besides serving as an important source of income for producers. Prasad sells his milk to the Ganga Dairy, a local private corporation, as do a number of his fellow villagers.

Last year, Prasad participated in a farmers’ training program organized by the International Livestock Research Institute (ILRI) under CSISA for members of the Hitkari Krishak Club, a local farmers’ association where Prasad serves as the secretary. In this training on ‘Crop Residue Based Feeding Strategies to Improve Milk Production of Dairy Animals,’ he learned that the potential average milk each cow can produce with improved feed is 30 liters.

Using the scientific formula taught during the program, Prasad prepared balanced concentrate feed from locally available ingredients for his dairy cattle and also adopted the use of green fodder. The results, he says, were remarkable. “Within two months the quantity and quality of milk drastically improved even though I was now feeding the cows a lesser amount of concentrates than before.”

Encouraged by this outcome, he increased his herd to 25 crossbred dairy cattle with milk yields incresead by 10-15%, milk fat and solids-not-fat (SNF) increased by 10-12% and 3-5%, respectively, and decreased concentrate consumption by 8-10% per cow. The increase in milk fat and SNF represents an improvement in the quality of milk, which results in higher price per liter of milk sold. For many of his fellow farmers, however, preparing the concentrate was time consuming and buying individual ingredients was expensive as most farmers keep only one or two cows. So, Prasad went a step further. He produced more concentrate than he required and sold the surplus to other farmers in his village at no profit, only charging an additional Rs. 1 ($0.02) as service charge.

Seeing this change in the level of milk production, farmers from other villages have become his customers as well. Today, Prasad manually prepares 25–30 tons per month, using 8 tons for his own herd and selling the rest. He also increased his land under green fodder so that he can sell that surplus as well. He is also assembling a tractor-driven grinding, milling and mixing machine to produce more concentrate to meet the demand of his growing new business.