Not so long ago, Nihar Ranjan Dutta, 26 years, was an unemployed science graduate in Hotapur village in Mayurbhanj district. Today, after 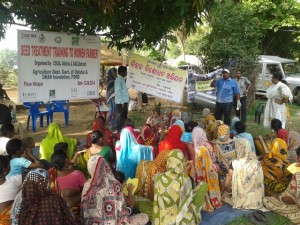 Simultaneously, women SHG members of Hotapur village, who also attended the field day at Bajjod, showed interest to develop community mat nursery and sell them to service providers as a profit-making and livelihood activity. After the training, 60 farmers from Hotapur showed enthusiasm to adopt MTR in this Kharif season, covering almost 40ha area. “Considering they had never heard of the MTR technique earlier, it was encouraging to see that they came forward and were ready to experiment,” said Naba Kishore Parida, Agriculture Specialist, CSISA. The women farmers were further trained on seed selection and seed treatment by the CSISA team on 12th June.

On 4th July, CSISA in collaboration with Department of Agriculture (DOA), Government of Odisha and DHAN Foundation organized a practical training on “Community mat nursery preparation” at Hotapur. It was attended by 60 participants, including service providers, women and male farmers, government officials and NGO staff.

Umesh Das, District Agriculture Officer, Bijay Pattanaik, Agronomist, Tapas Bala, Agriculture Officer of Betnoti Block and Pradeep Bhanja, Village Agriculture Worker of Santara Gram panchayat represented DOA at the training and learned about the mat nursery preparation under both dry and wet condition. “After realising the ease of preparation, the district agriculture officer gave assurance that he will advise all the service providers of all four blocks to develop this type of nursery in this Kharif season. This is a good outcome,” said Naba.

Press coverage of the mat nursery training held on 15 June.