Livestock provides an important complement to cereal farming-based livelihoods in South Asia and can increase incomes for millions of crop-livestock farmers. In collaboration with other CSISA partners, the International Livestock Research Institute (ILRI) has been helping crop-livestock farmers to boost income and milk production by increasing the availability of fodder, promoting efficient use of cereal residues and improving the quality of supplementary feeds in India, Bangladesh and Nepal.

ILRI applied the lessons learned during CSISA Phase I regarding multi-disciplinary R&D, working in innovation hubs, adapting technologies for new contexts and forming strategic partnerships in CSISA Phase II in order to intensify the uptake of locally adapted feed interventions and strengthen farmer linkages with input (including service) and output markets. ILRI explored business opportunities in CSISA’s new hub in Odisha, as well as new sites in Bihar, south-west Bangladesh and the far west of Nepal.

In Phase II, ILRI focused on technology development and adaptation, as well as capacity development among partners for the uptake and scaling out of proven technologies and best practices. Tangible impacts included higher milk yield (10-14 percent) and better milk quality (1-3 percent higher fat content), which translated into higher income from milk sales (additional US$ 50-150/animal/year) and/or reduction in feed costs (30 percent savings from less waste due to chopping, for example). The increased uptake of locally-adapted livestock feeding practices introduced by CSISA have contributed to improved livestock productivity. 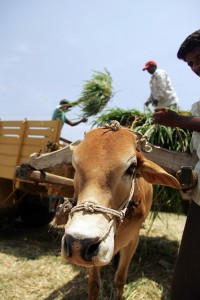 In Bihar, 1,500 farmers across six districts (Samastipur, Muzzafarpur, Begusarai, Vaishali, Ara and Patna) have adopted urea-treated maize stover as feed, and self-prepared balanced concentrate feed and mineral mixture as feed supplements to basal diets of their dairy cows. In Odisha, around 1,200 farmers across three districts (Puri, Bhadrak and Mayurbanj) have adopted chopped straw and fodder grass as essential diets of their dairy cows, supplemented with improved concentrated feed and mineral mixture.

In Bangladesh, 150 farmers have adopted maize stover as feed and over 1,500 farmers have been practicing mechanical chopping of crop residues, of which two out of every three is female. In Nepal, 700 farmers (in five village development committees) have adopted chopped straw as basal diet supplemented with self-prepared balanced concentrate feed and mineral mixture, an increase from 10 percent (pre-CSISA interventions) to 40 percent among farmers inside and outside CSISA’s farmer-group collaborators.

The increased availability of high-quality chopped fodder reflects the emergence of derived demand for complementary inputs and services to sustain the adoption of new feed technologies and best practices. Through various trainings and capacity-strengthening activities, auxiliary service enterprises were developed, revealing the entrepreneurial tendencies of our collaborators, expanding their livelihood opportunities in the process. For example, eight local service providers (LSPs) in Bihar and five LSPs in Odisha have been established for preparing balanced concentrate feed, while 12 LSPs have been established in Bangladesh to provide straw chopping services in response to increased demand for chopped straw and fodder.

In addition, two fodder markets in Shanerhat and Pirgong in Bangladesh’s Rangpur district were established in collaboration with local partners to serve increased demand for fodder, which have made fodder easily accessible and widely available while providing income-generating opportunities for fodder growers. With the introduction of fodder crops and forages as part of a basket of feeding options, farmers in CSISA sites were able to expand their feed resource base, helping them mitigate productivity constraints arising from seasonal variability and the generally low quality of available feeds.

This article is authored by Lucy Lapar, Senior Scientist and Agricultural Economist at the International Livestock Research Institute (ILRI).