Despite continuous pessimistic murmurings, South Asia is not in the depths of a Malthusian crisis. While population growth rates are high, they are slowing. And although food staple yields are low relative to the rest of the world, they are still inching upwards. The dark and dreary picture of a hungry future may persist in our collective outlook for the future, but it won’t be for a lack of available food. In South Asia, hunger and malnutrition will remain the province of social and economic entitlements, gender relations, health and nutritional status and the quality of food.

But we shouldn’t be complacent. Achieving sustained yield growth requires continued investments in modern science, agricultural research and development and extension. And continued yield growth on a sustainable basis — growth without environmental degradation — is increasingly viewed by South Asian leaders, entrepreneurs and civil society as the only way forward.

Well-structured public policies can incentivize smallholder farmers, rural entrepreneurs and consumers toward choices that are more or less welfare-improving, yield-enhancing or environmentally sustainable. For example, a tax or fee for groundwater use can stem the excessive extraction of this scarce resource in regions where aquifers are already threatened by overexploitation. Conversely, tariffs and non-tariff barriers to the import of low-cost irrigation equipment can prevent widespread adoption of supplemental irrigation, as was the case in Bangladesh until the late 1980s.

Governments have a fairly wide range of policy tools at their disposal. They can enact laws, establish guidelines and regulations, invest in programs and projects, introduce or withdraw taxes and subsidies and set the rules for trade and investment. Each application of a policy tool is accompanied by resulting outcomes, trade-offs and possibly unintended consequences. CSISA’s greatest challenge has been to work with its partners and stakeholders to identify the appropriate policy tools with which to achieve the desired outcomes, while also being cognizant of the concurrent trade-offs and consequences.

CSISA’s policy work has aimed to develop a critical mass of research needed to promote an actionable and evidence-based agenda for improving public policies to address South Asia’s cereal systems. In doing so, CSISA has weighed in — through both scholarly research and outreach efforts — on several areas related to sustainable intensification of cereal systems in South Asia’s most risk-prone geographies.

For example, CSISA’s policy work has strengthened the quality of the debate and helped frame the ongoing contestation around seed systems development in the region. CSISA has helped policymakers identify key priorities amid all the noise accompanying the discourse about the proper role for state-owned enterprises in seed distribution in Bangladesh, the role of private and foreign direct investment in the seed market in Nepal and the future of genetically modified crops in India.

Similarly, CSISA’s policy work has tackled the question of input subsidies and their impact on sustainable intensification. Blanket subsidies on seed, machinery and equipment are common public interventions throughout the region, but, while they can be useful in encouraging new technologies and practices among smallholders, they often come at a high price: forgone spending on other development priorities, elite capture of the subsidies, distortion of input markets and crowding-out of private investment. For example, CSISA’s work on the economic and environmental trade-offs associated with poorly targeted subsidies for laser land levelers in eastern Uttar Pradesh provides state and local government with alternative strategies for improving the impact and lessening the damages caused by subsidies.

Finally, CSISA’s policy work has been striving to transform research and extension guidelines and recommendations from very linear and top-down models to something more nuanced — something more in tune with the precision and site-specificity required for sustainable intensification in the risk-prone geographies in which CSISA operates. CSISA efforts have highlighted the importance of recognizing heterogeneity within populations targeted for the dissemination of new cultivars, agricultural equipment and inputs, as well as the potential to use this heterogeneity to tailor interventions for greater efficacy.

CSISA research and outreach efforts have emphasized the potential for tailoring extension messages to female household members as a means of transmitting information to both men and women about new technologies. And CSISA efforts have drawn attention to the complexity of systems-based solutions for sustainable intensification and the opportunities to bring more smallholders on board through programs that tie public research and extension to private service providers, input suppliers, crop aggregators, community-based organizations and other market actors.

There is still a lot for CSISA to do to improve the policy environment for sustainable intensification in South Asia. New partners are needed, both to build a strong evidence base and to carry that evidence forward to government and corporate decision-makers. New audiences are needed to scrutinize and lend support to the social, economic and environmental goals of this work. And a clear understanding of the long-term nature of this engagement is needed to ensure that policy decisions in support of sustainable intensification have the desired impact and scale. 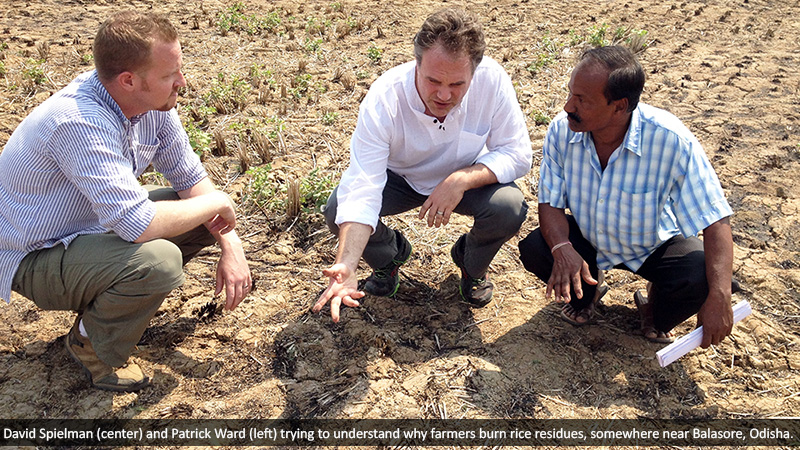 CSISA’s research team from IFPRI are deep into the design, data collection and initial analysis phases as they start work on three major studies rolling out during the kharif (monsoon) rice season. These studies will provide new insights on how farmers perceive different CSISA-supported technologies, and how these perceptions vary across different types of farmers. This helps CSISA and, more importantly, extension agencies and NGOs, to have a better understanding of what works, where and why.

The latest study will explore farmers’ valuation of – and returns to – the use of mechanical rice transplanters (MRTs) in Bihar. Another study examines farmers’ preferences for – and uptake of – new stress-tolerant rice cultivars coupled with a weather index insurance product in Odisha. Both studies take their cues from prior IFPRI studies: the former on farmers’ willingness to pay for laser land levelers in eastern Uttar Pradesh and the latter on farmers’ preferences for a similar cultivar and insurance product in Bogra, Rajshahi division, Bangladesh.

Each study combines exercises that explore respondents’ perceptions of new agricultural products and services before actually providing them. For example, the study in Bihar uses experimental games with farmers to discern differences in male and female demand for MRTs and the potential labor savings it might offer. The studies in Bogra and Odisha use similar exercises to understand how farmers perceive the probability of a drought during kharif and the costs and benefits of somehow insuring themselves against that risk, with weather index insurance and/or drought-tolerant rice varieties.

At this moment, several of these experiments – accompanied by village and household surveys followed by distribution of products and services – are underway and in the field. The team is working with local partners for these studies – Gram Unnayan Karma (GUK) in Bogra, Balasore Social Service Society in Odisha, HopUp for survey management and implementation in Bihar. And with collaborators from the University of California, Davis and the University of Georgia, these studies will provide critical insights for CSISA and its wide range of stakeholders. And with these insights, IFPRI and CSISA are better able to advise policymakers on the types of policies and investments they might make to affect evidence-based solutions that encourage inclusive technological change across South Asia’s rural economy.