Estimates show that as of 2013, nearly 1.5 million hectares of arable cropland in India have been brought under conservation agriculture (CA)-based practices. Outside of northwest India, however, the concept remains relatively unfamiliar to farmers and extension personnel. Against that backdrop, the Cereal Systems Initiative for South Asia (CSISA) conducted an intensive training program on CA from 2-11 September for researchers from the national agricultural research and extension system (NARES).

Organized at the Central Soil Salinity Research Institute (CSSRI) in Karnal, Haryana, the training focused on developing resilient systems through CA-based management practices. The objective was to train researchers to accelerate farming system adaptation to climate risks through CA-based best-bet management practices that reduce vulnerability. A total of 18 researchers participated in the training, which was inaugurated by Gurbachan Singh, Chairman, Agricultural Scientists Recruitment Board (ASRB), New Delhi. 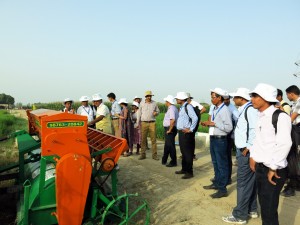 Participants received hands-on-training on CA technologies and visited various participatory and strategic trials during the program.

Singh highlighted the importance of the program saying that CA can improve the productivity and profitability of India’s cropping systems under aberrant weather situations in different agro-climatic zones of the country to sustain food security, while maintaining and improving the quality of the natural resource base. Globally, the positive impact of CA-based techniques on natural resources, climate change adaptation and mitigation have been widely acknowledged. In India, realizing the importance of CA, more strategic research on precise nutrient application, water, cultivars and weed management has been initiated only in the recent past.

The training highlighted first-hand experiences and insights from scientists who had implemented various aspects of CA in the Indo-Gangetic Plains (IGP). As Andrew McDonald, CIMMYT Cropping Systems Agronomist and CSISA project leader, pointed out, “The continuous cultivation of rice-wheat cropping systems for almost five decades in the IGP has considerably degraded natural resources such as water, soil, climate and biodiversity.” According to D.K. Sharma, Director, CSSRI, “CA has the potential to check the process of resalinization of north-western IGP by reducing the evaporative losses from the soil surface and its emphasis on stopping residue burning.”

In his presentation, R.K. Malik, CIMMYT Senior Agronomist and CSISA Objective 1 leader, focused on the need to design resource use-efficient, diversified and resilient cropping systems as an alternative to intensive rice-wheat systems. He further highlighted the issues of groundwater depletion, declining soil health associated with multiple nutrient deficiencies, pest outbreaks and shift in weed flora. On the other hand, M.L. Jat, CIMMYT Senior Scientist, stressed upon how the convergence of technologies has helped make climate-smart agriculture a reality that helps safeguard farming systems from weather abnormalities.

Praising the training program, Rameshwar Singh, Project Director, Directorate of Knowledge Management, Indian Council of Agricultural Research, stated that it was a unique opportunity for the scientific community working in the area of natural resource management. The program included hands-on training on numerous technologies such as the laser land leveler, turbo seeder, multi-crop planter and mechanical transplanter. Participants further benefited from visits to participatory and strategic trials and agricultural implements’ manufacturing sites.