Rice nurseries are an important, but often underappreciated, component of a successful agronomic production cycle. How a rice crop is managed in its early stages influences performance and yield later. For example, it is very important to transplant healthy seedlings at an appropriate time to get optimum yield. However, in the absence of proper nursery management and supervision, many farmers obtain suboptimal yields.

Many Bangladeshi farmers are knowledge-, labor- or resource-constrained and do not follow  optimal nursery management practices. Farmers practice less productive methods, such as not making drainage channels in seedbeds, not removing half-filled or empty seeds, not treating seeds with chemicals to reduce the risk of insect and disease infestation at the later stages of crop growth, using unnecessarily large volumes of seeds, not applying farmyard manure and or optimal doses of fertilizers while preparing land for seedbeds, and transplanting old or thin seedlings.

The use of old and unhealthy seedlings has a huge economic cost. Studies have shown that the use of old and unhealthy seedlings can cause more than 10 percent yield loss in rice. This means that scaling the adoption of young and healthy seedlings in at least half of Bangladesh’s 11.7 million hectares rice area could produce an additional 2.5 million tons of paddy per year, which would contribute an additional US$ 680 million to the national economy, and potentially improving the food security of millions of poor Bangladeshis. This would make a huge positive socioeconomic impact for the country and it is achievable by rolling-out some simple interventions.

A variety of improved rice nursery management options are available for Bangladeshi farmers, including seed treatment before sowing (to reduce the potential for diseases), adopting optimal sowing dates for different cultivars in different environments, planting in the correct seed densities, using balanced organic and inorganic fertilizers, and following optimal transplanting age and density. The latter is particularly important for avoiding transplanting shock, which in addition to causing yield losses can also result in delayed crop maturity and harvests, and can further delay the sowing of the subsequent boro crop, in the case of monsoon aman rice. However, majority of farmers are not using these improved options because of knwoledge gap or lack of resources.

A trader sells his rice seedlings at a ‘haat bazaar’ or open air-market in Bangladesh. In Faridpur District, approximately 10 such markets are convened in the aman season where 15-20 traders, coming from different locations, buy and sell seedlings. Photo: Humnath Bhandari/IRRI

The Cereal Systems Initiative for South Asia (CSISA)  is playing a catalytic role to scale out healthy rice seedlings in the Feed the Future Zone in Bangladesh. Working collaboratively with the Department Agricultural Extension, NGOs, development projects, input dealers, farmer groups and lead farmers, CSISA has focused on a two-pronged approach to scale-out the use of healthy rice seedlings. First, targeting individual rice farmers to  produce  and use  healthy rice seedlings through better nursery management practices. Second, targeting rice nursery entrepreneurs for large-scale production and supply of healthy seedlings in the market alongside income generation through rural enterprise creation.

A diagnostic survey has indicated significant potential to promote improved rice nurseries management practices for production and use of healthy rice seedlings in FtF zone, especially when these messages are deployed at a large scale by development partners and livelihood initiatives, and by linking entrepreneurs to markets. However, the interventions cannot be scaled-out in the tidal flood prone areas of Barisal Hub and the submergence prone areas of Faridpur Hub.

Through mass-media campaigns such as showing a video and distributing leaflets to farmers, training  lead farmers and farmer groups on  ideal rice nursery technologies, training  rice nursery entrepreneurs and input dealers on production and marketing of healthy seedlings, and conducting training of trainers workshops for extension agents of  government and NGO, CSISA has supported large-scale awareness and adoption of healthy rice seedlings among farmers across Faridpur, Jessore, and Barisal Hubs in this year. In 2016 aman season alone, CSISA, working together with partners, showed a video to more than 23,200 farmers, distributed leaflets to 650 farmers, initiated eight new community-based nurseries, trained 20 rice nursery entrepreneurs, and conducted training of traniers workshop to 80 extension agents. These activities will continue and expand in coming seasons.

“Since my childhood I have been fascinated by machines and always look for ways to improve efficiency of my farming operations,” says 82 year-old farmer, Md. Abdur Rahman from Jessore district in southern Bangladesh. After attending a machinery demonstration event by CSISA-Mechanization and Irrigation (CSISA-MI) this year, Rahman started using the seeder fertilizer drill (SFD).

“I came to know about seeder fertilizer drill, which could be attached to my existing two-wheel tractor and can simultaneously till, seed and fertilize in line with greater precision and saves energy,” adds Rahman. His excitement is shared by farmers in the district, who are adopting new agricultural machines to generate more profit. 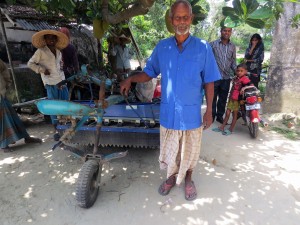 “Last season, I saved over US $25 and hope to save the same amount in this season by tilling, seeding, fertilizing and leveling my land with this seeder machine,” says Rahman, who bought the SFD for US $458 and works with his nephew to operate this machine on his farm. He also plans to start an SFD service business in his area from this coming dry season. He will charge US $25 per acre and hopes to cover 30 acres, which will give him a revenue of US $770 for tilling and seeding.

Rahman likes to work on machines and has worked with the CSISA-MI team to improve his machine performance by modifying the metal work under the seed box, preventing dirt from clogging and infiltrating the seed box during use. “With this machine, you can do a number of things at one go and so you are saving your money, time and reducing intervals between crops.  In agriculture if you can save time, you can maximize production as well as increase cropping intensity that will earn additional income,” says Rahman to other farmers in the area, who are eager to adopt the SFD after seeing Rahman’s profit.