A new investment by the U.S. Agency for International Development (USAID) in the Cereal Systems Initiative for South Asia in Nepal (CSISA-NP) was launched on 10 April, 2015 at a public event in Kathmandu. The investment by USAID India and USAID Washington, totalling US$ 4 million over four years, aims to work with the private and public sectors to benefit smallholder farmers by integrating scale-appropriate mechanization technologies with resource conservation and management best practices.

“For a country where 75 percent of the population makes its livelihoods in agriculture, these partnerships are absolutely important. Agriculture development, as we know, is one of the surest routes out of poverty,” remarked Beth Dunford, Mission Director, USAID Nepal at the launch. Eight million Nepalis still live in extreme poverty and almost 3 million Nepalis live in recurring food insecurity. “We also know that growth tied to gains in agricultural productivity is up to three times more effective at raising the incomes of the poor than growth from any other sector,” Dunford added. 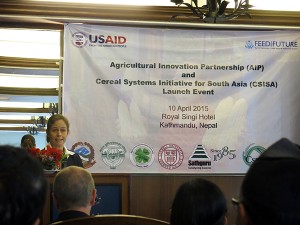 The new phase of CSISA-NP, an initiative led by the International Maize and Wheat Improvement Center (CIMMYT), will build on successes and lessons learned from the ongoing work of CSISA Nepal, currently funded by USAID Nepal, and will continue to focus on districts in the mid-West and far-West regions of Nepal. It will complement USAID’s Feed the Future program, KISAN, which works to improve agricultural productivity and incomes for over one million Nepalis.

The new work plan will be implemented in close collaboration with the Ministry of Agriculture and Nepal Agricultural Research Council, to strengthen seed value chains for timely access to improved varieties by farmers, promote sustainable intensification of agricultural systems through increasing lentil cultivation and better-bet management, increase wheat productivity using new technologies and better farming practices and facilitate precise and effective use of nutrients to increase crop yield.

A specific component of the new investment is designed to support and build the capacity of change agents like medium-sized seed companies, agro‐dealers and mechanized service providers. “Building on its success of working with the Indian private sector, CSISA will expand the program in Nepal to facilitate application of specialized, commercially-viable equipment for small and marginal farmers,” highlighted Bahiru Duguma, Director, Food Security Office, USAID India.

“CSISA supports more than 1,600 service providers in eastern Uttar Pradesh and Bihar in India and we want to replicate that success in Nepal of working with local entrepreneurs to help reach farmers with mechanized technologies,” said Andrew McDonald, CSISA Project Leader.

The launch was attended by representatives from the Nepal Ministry of Agriculture, Nepal Agricultural Research Council, Agriculture and Forestry University and USAID officials and received positive media coverage in Nepal. 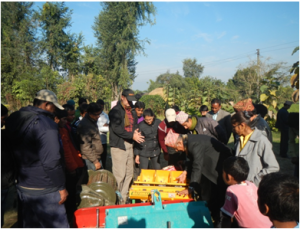 To enhance agri-mechanization in the Western and Far Western Development Regions of Nepal, CSISA organized an interaction meeting of the agro-dealers/agents, with the help of USAID’s KISAN project, on 22 December 2014 in Dhangadhi, Kailali.

Dr. AP Regmi, CSISA-NP’s ARTC Manager of the Far West region welcomed the participants and explained briefly about the history of CSISA NP and its objectives for promoting scale appropriate agricultural mechanization in the Western Development Regions.  Scott Justice, CIMMYT Mechanization and irrigation Specialist in South Asia, further highlighted the objectives of creating a regional platform or association that will strengthen and develop the agro-machinery dealers technical capacity and will accelerate fair and equitable spread and use of targeted technologies by the Far West Farmers.

Tika Ram Thapa, Senior Agriculture officer from District Agriculture Development Office (DADO) Kanchanpur highlighted the importance of agro-mechanization in Far West. “Far western region is at infant stage regarding agro- machineries, it needs to establish strong network among all the institutions related to agricultural machinery including private sector,” said Thapa. “Agro dealers, who are also the change agents, should have strong network with the DADOs, as the farmers are in direct touch with us,” explained Thapa.

Similarly, Yuvraj Pandey, Senior Agriculture Development Officer, Kailali highlighted the need to attract youth towards new technology and mechanization in the context of labour scarcity and increasing out-migration of youth for employment.  Custom challenges were raised by the dealers in importing the agricultural machine and the parts. Shiva Bhandari, Chief Customs Officer, Dhangadhi addressed to this concern and talked about the tax charges to agricultural machinery.

CSISA will continue to organize more regional meetings to help familiarize dealers with new agro-machinery and aims to support the development of Far Western Agro Dealer Association that will increase the business linkages between farmers, dealers, importers and public organizations to increase expansion of appropriate agro-machinery in a sustainable manner.

Laxmi Khadka is a progressive farmer based in Nepal’s Dadeldhura district. She lives with her husband, two sons and daughter. Their farm is a mixed crop – livestock enterprise where they cultivate upland rice, wheat, maize and vegetables. In the mid-hills of Nepal, seasonal and semi-permanent male outmigration occurs at one of the highest rates in the world, which creates labor bottlenecks that erode profitability and compromise the timing of key agricultural operations. 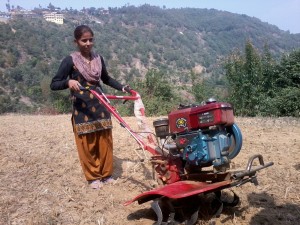 At present, Laxmi spends most of her time tending to her agricultural fields and livestock and struggles to balance her farm work with the needs of her family. Across the mid-hills, the burden of farm management is falling increasingly on women household members like Laxmi who stay behind. Further, the number of bullocks has declined precipitously, which also delays key farm operations like ploughing. For both reasons, the niche for scale-appropriate mechanization is strong but beyond the reach and current experience of most farmers.

In Laxmi’s community, CSISA introduced the mini tiller as a low-cost option for rural traction and identified a group-based service provision model to recoup costs and share the technology across the village. Although initially apprehensive, community members quickly realized that the mini tiller saves time and money and Laxmi observed she was able to plant her maize with the onset of spring rains as she didn’t need to wait to hire labor or bullocks.

“From now on, we will not have to depend on the men for ploughing,” said Laxmi.

Farmers observed that it can be difficult to carry the mini tiller from one terrace to another, especially when terraces are at different heights and separated by bunds. These small problems have been solved through the collective action of the group with 2–3 farmers coordinating planting and machinery transportation from field-to-field. Farmers have also learned that operation of the mini tiller is relatively easy with most women trained in the technology by CSISA expressing and demonstrating confidence in its operation.

With timely planting assured with the mini tiller, Laxmi was also eager to evaluate additional productivity-enhancing technologies and planted maize hybrids for the first time in 2014. Her productivity levels tripled from 2013 and she produced a marketable surplus (30% of production) that was an important source of income for her family. 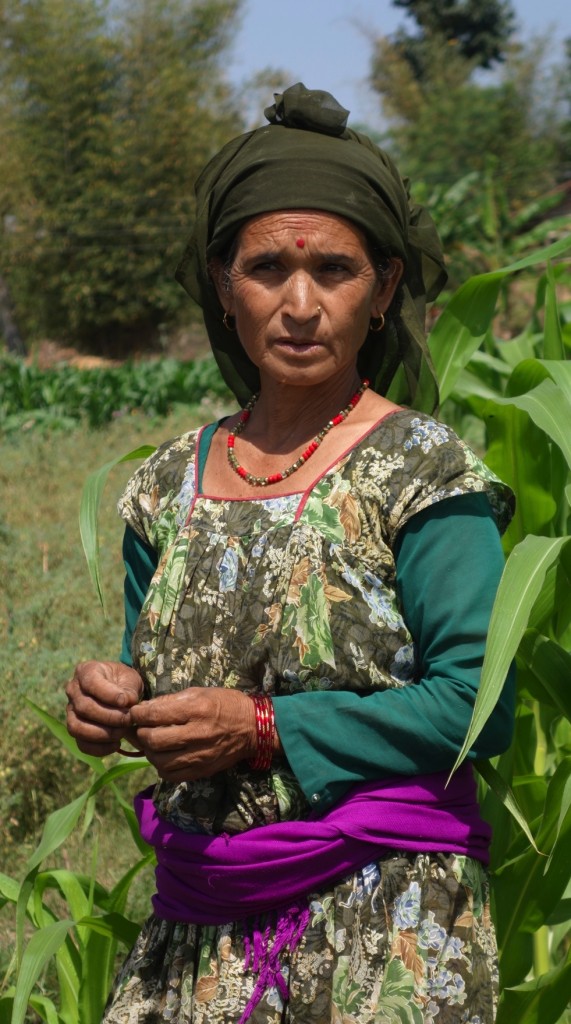 In the western Terai plain of Nepal, farmers typically grow no more than two crops per year and there is a spring fallow period in between winter crop harvesting and rice planting that remains fallow. This fallow period is particularly long in areas where potato is cultivated.

At places where irrigation water is available and timely harvest of the winter crop takes place, maize can be grown and marketed either as ‘green cob’ for the fresh market or, in some cases, grown to maturity to produce dry grain. Since no crops are displaced when a farmer transitions from double to triple cropping systems, the income generated by this third season is purely profit. Nevertheless, cropping in this period is uncommon and better-bet management recommendations for promising crops like maize are lacking.

Starting in 2013, CSISA-Nepal initiated a series of participatory research trials in farmer’s fields to determine optimum management practices for maize in order to encourage triple cropping and to generate income. On-farm trials demonstrate that spring maize can be immensely remunerative, with returns exceeding $1,000/ha.

In addition to sound agronomic advice, expansion of spring maize area in the Nepali Terai will be bolstered by closer linkages between maize processing mills and small famers as well as the introduction of labor saving technologies such as maize shellers to reduce drudgery. CSISA is working with the KISAN project to commercialize small-scale machinery and to improve linkages between farmers and markets.