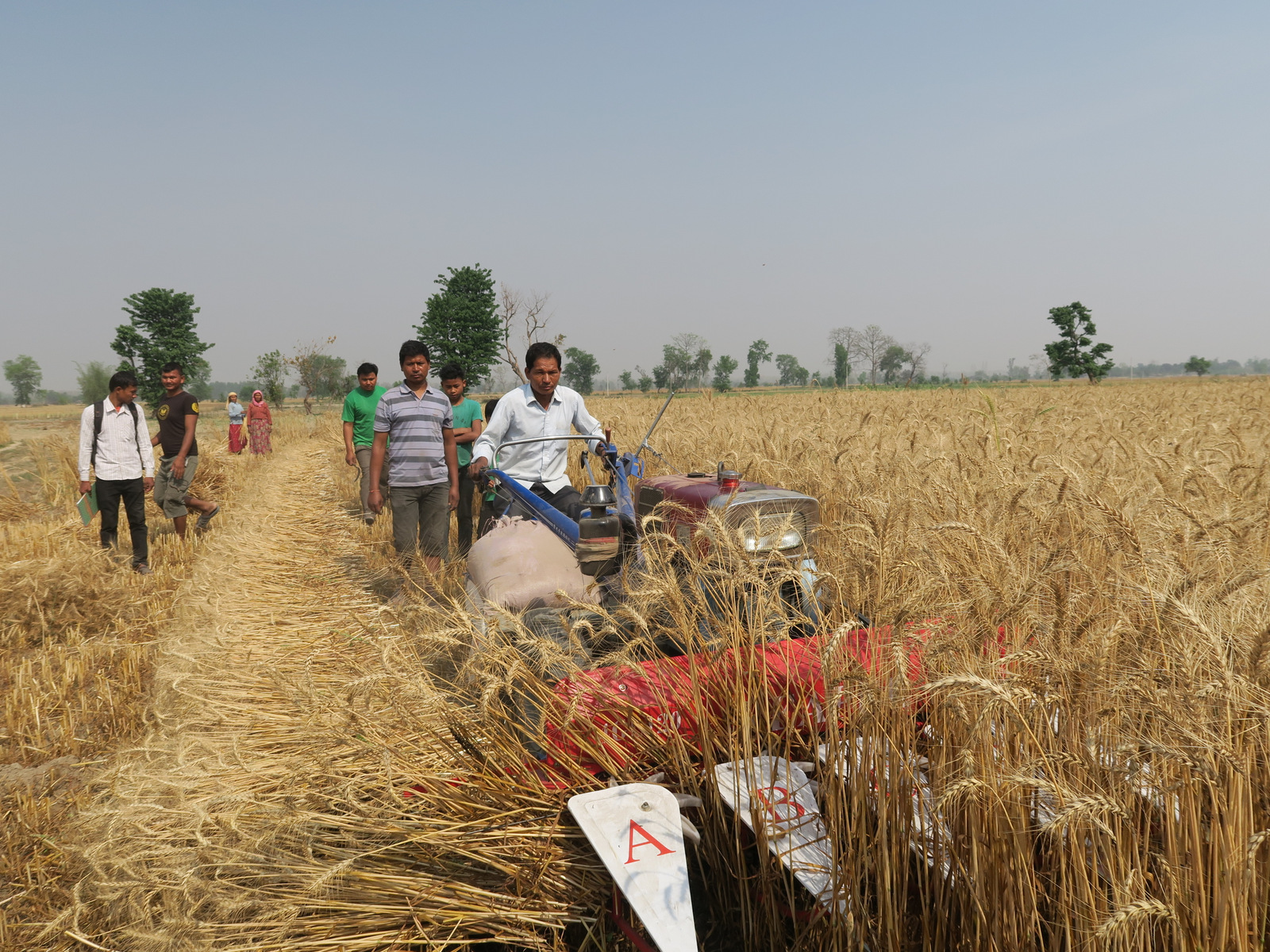 Nepal struggles with labor shortages in agriculture, particularly due to the out-migration of laborers who move in large numbers to India and Gulf countries to work. These shortages have increased labor wage rates and the cost of cereal crop production. In response to these constraints, and to try to reduce drudgery and increase profits associated with farming to make agriculture more attractive to young people, CSISA has been facilitating the uptake of the reaper, which can increase the speed, improve the timeliness and reduce the labor costs associated with harvesting cereal crops like rice and wheat. Reaper attachments can be front-mounted on the many different two-wheel tractor models available in Nepal, making it relatively affordable for farmers.

Fifteen years ago, a few reapers were sold in central Nepal, but prior to CSISA’s interventions, reapers were not available anywhere in the Feed the Future zone, which constitutes much of the far and mid-west development regions. In 2014, CSISA and its public and private sector partners began to demonstrate reapers in farmers’ fields, starting with a stock of 20 reapers. Demonstrating the functionality and benefits of the reaper across different Feed the Future districts generated rapidly increasing demand among farmers and service providers. To ensure the machines were available at the local level in the areas where reaper uptake was being facilitated, CSISA worked with private sector suppliers and the Nepal Agricultural Machinery Entrepreneurs’ Association (NAMEA) to ensure larger stocks of reapers were available in an uncertain market and greatly multiplied reaper field demonstrations.

Towards the end of 2016, reaper importers’ district sales agents began to capitalize on farmers’ increasing interest in reapers by holding their own farmer field days, focusing their efforts on the 2016 rice harvest. With CSISA’s technical support, NAMEA and its members conducted more than 50 demonstrations in 2016. As a result of the multiplying effect of private sector participation, starting from near zero purchases in 2014, by the end of 2016 farmers in the Feed the Future zone had purchased 678 reapers.

In early 2017, CSISA boosted reaper adoption in Nepal by increasing the range of stakeholders they support. CSISA facilitated innovative partnerships between the private and public sectors so that public extension agencies (such as the Department of Agriculture and the Prime Minister’s Agriculture Modernization Project) partnered with local agents to conduct even more farmer field days. For example, CSISA provided training to farmers who purchased a reaper to enable them to become service providers, thereby increasing the number of farmers who had access to reaper services and the amount of land under reaper harvesting. Each reaper owner provided harvesting services to 10 farmers on 10.5 ha of rice and wheat area in the Feed the Future zone. Also in 2017, District Agriculture Development Offices and the Prime Minister’s Agriculture Modernization Project began providing subsidies on reapers and conducting their own demonstrations.

As commonly occurs when machinery adoption spreads, the availability of spare parts and repairs for reapers lagged behind sales. To address this problem, CSISA, the Nepal Agriculture Research Council and private sector companies provided reaper repair training to district sales agents’ mechanics, as well as small grants (US$ 200 worth of “pre-positioned” reaper spare parts) to certain agents/mechanics in the far and mid-west region to seed the market.

A 2017 CSISA survey of reaper adopters in the Feed the Future zone indicated that, compared with manual harvesting, reapers increased average farm-level profitability by US$ 120 when used for harvesting both rice and wheat. Reaper adoption also relieved families of having to find and manage work teams during harvesting periods, an activity that farmers typically found stressful. Reapers also gave farmers the opportunity of becoming entrepreneurs by turning their reapers into a small business.

As of March 2018, traders in the Feed the Future zone have sold the vast majority of their 2,197 reapers, representing total sales of approximately US$ 1.2 million. In the 2017 rice and 2018 wheat seasons, farmers harvested around 11,000 hectares of rice and wheat using reapers. Just prior to the 2018 sales season for reapers, importers reported that they had over 300 reapers in their warehouses; to date, farmers have purchased almost 70% (200 pieces). Interestingly, more than 95% of service providers purchased reapers without any subsidy, which indicates a willingness to take risks and an expectation of success. In response to the increased demand, the number of importers increased from four to seven between 2016 and 2018. Given that sales almost doubled in each of the last three years, optimism abounds about the potential for reaper scaling in Nepal.